World wide agreements, the pandemic, wind turbines, solar panels and electric cars are all helping lower emmisions but the amount of carbon dioxide in the atmosphere is still increasing every year. There is now over 410 parts per million of carbon dioxide in the atmosphere, (a save amount is 350ppm).
Globel warming is now 1 degree C warmer than pre industrialised levels and we have witnessed the wildfires and floods that this has caused.
The Intergovernmental  Panel on Climate Change has published their latest report  predicting 5 future scenarios from 1.3 to 5 degrees C of warming by 2100; based on 5 different levels of CO2e emmisions.  To have a good chance or staying below 1.5 degrees C we would need to be net zero within 9 years! Net zero means cutting emmisions to absolute possible minimum so that what is left can be absorbed by trees or other carbon capture methods.

Title Slide. Arial 40pt (ipcc.ch)
What’s the world going to be like in 2100?
Based on current policy’s and pledges a 2.4 – 2.7 degrees C rise which will cause all the arctic sea-ice to melt in the summer. Less of the suns heat will be reflected and and more will be absorbed into the dark sea. The increased acidification of the sea would reduce fish stocks further and over 95% of coral reefs would be gone. There would be large scale melting of frozen soil, causing landslides and releasing more CO2e, further adding to climate change. Large areas of the world will be uninhabitable causing mass migration of  people to cooler climates. Sea level rises of 1 – 2 meters will flood millions of homes near the coast. There will be more intense inland flooding caused by monsoon type rainfall. More intense hurricanes and larger wildfires will also damage homes and kill trees and wildlife. Some rivers and lakes will dry out and crops will die due to widespread droughts. Millions of people will die of heat exhaustion in cities.

Reduced crop yields will cause starvation that could lead to the breakdown of society in many countries.

This is why Eco Product Designers  create products that help consumers reduce their carbon footprints. Some people are buying second hand products to reduce the carbon emissions, others are buying new energy efficient products instead.

The pandemic has caused inflation, lower wages and shortages of goods which has reduced world wide emmisions. Having food and a safe warm home is more important than buying new clothes, gadgets, cars and going on foreign holidays. Most consumers know manufacturing products causes global warming but they think it’s up to the manufacturers and the governments to look after the climate. There are a growing number of consumers who want to reduce there carbon footprints to a sustainable level and are keen to by eco products that help them achieve this.

Meny young people today are worried about having children themselves because of global warming. A baby born today is on a planet 1 degrees warmer than it should be. By the time they are 80, droughts and floods will have reduced food supplies and there will be mass migration of climate refugees who need to be rehoused in cooler countries.

According to the IPCC we must make deep and sustained cuts to CO2e emissions year on year in order to keep global warming below 1.5 degrees C.

Watch the Our Planet : Our Business video to fully understand the Climate Emergency. 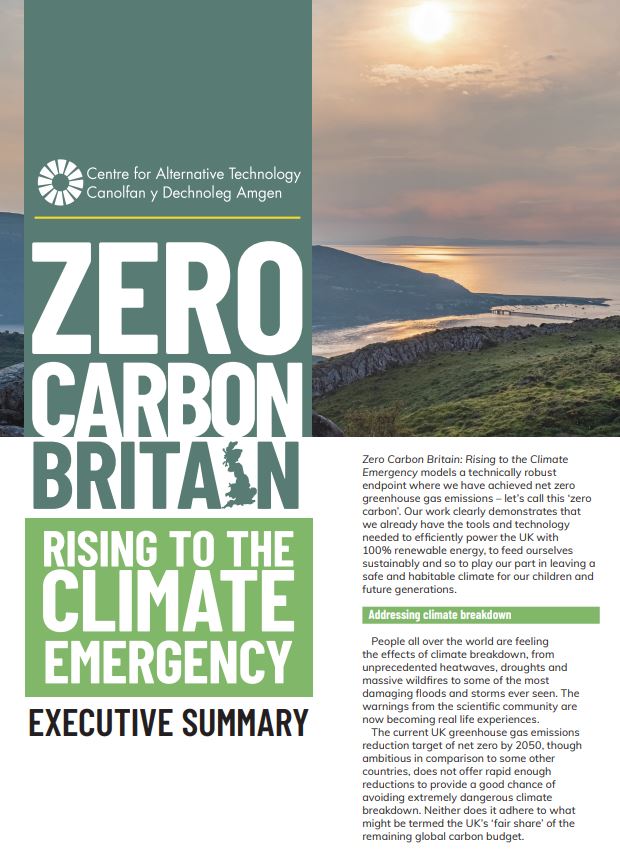 ​The Centre for Alternative Technology  has a report  Zero Carbon Britain that explains how we can be net carbon zero in 10 years. It promotes using existing safe energy from wind, solar, tidal, geothermal,  liquid biofuel, and biogas. It recommends building well insulated home made from wood with battery storage. They also recommends less cattle and dairy farming and more forests. All the changes are community based to help people work locally and reducing imports.