How to measure the carbon footprint of a product

Carbon footprint (CO2e) refers to all greenhouse gases including methane and nitrous oxide.

Product designers can assess the carbon footprint of their designs using the sustainability calculator built in to Solidworks (CAD package).  They choose the material and production method for all the parts from the Solidworks Sustainability database. They select the regions of the world where the parts are made and sold.  They choose the type of transport, specify the products life expectancy and  estimate the energy required to use the product. The sustainability calculator then estimates the total amount of non renewable energy used, the CO2e emissions, the acidification of air, and the amount of water polluted.  This basic Life Cycle Assessment is then saved as a benchmark so the Product Designer can try to improve their designs. The designer can modify the part dimensions, material choices, manufacturing methods and locations to reduce the parts environmental impact. Electronic circuit boards can also be assigned as a part material to be included in the calculation. 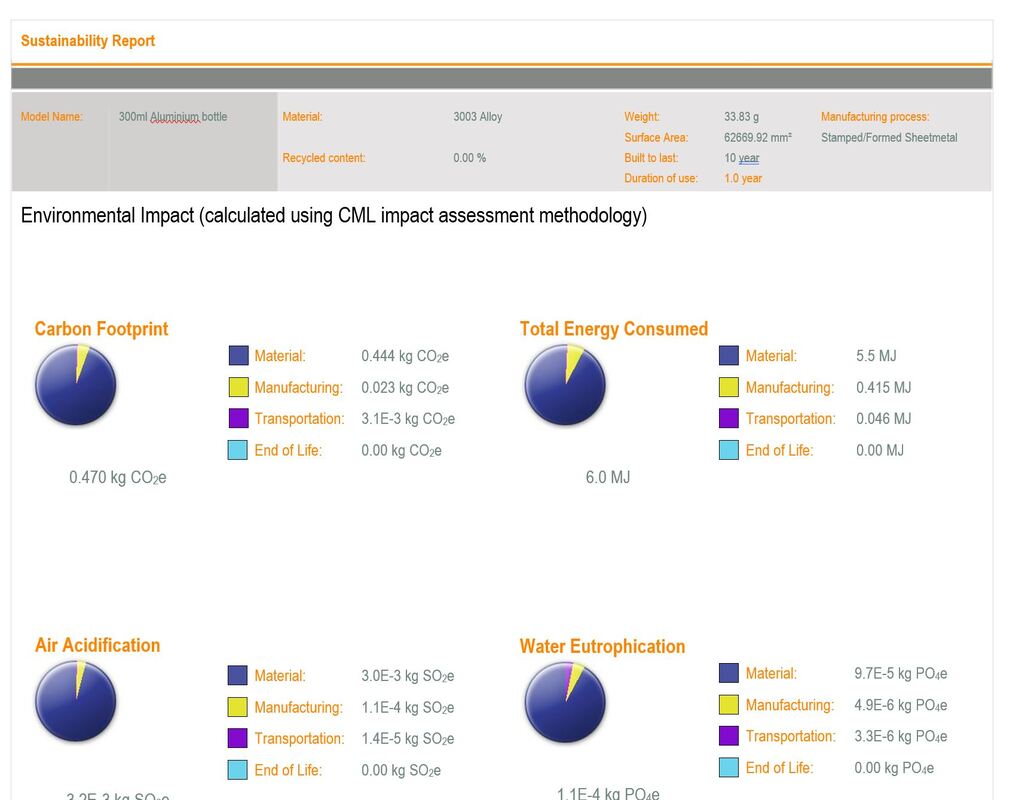 If product designers don’t have Solidworks Sustainability they can make a basic assessment of the carbon emissions using the part volumes and material choices. Material databases specify the CO2e per Kilogram of material.  Times this by the weight to estimate the relative environmental damage caused by the material in each part. The CO2e per kg of material can be found free at carbonfootprint.com.

CO2e levels are increasing worldwide and we are now in a climate emergency that could cause mass extinction of the human race within a few hundred years if global temperatures continue to increase at the current rate.

We need to reduce our emissions year on year until we reach Net Carbon Zero when the amount of carbon produced can naturally be absorbed by the biosphere – soil, trees, and seaweed etc. Net Carbon Zero has been estimated between 1 to 2.5 tons per person per year.

According to the World Wildlife Fund the average person living in the United Kingdom had a carbon footprint of 12 tons in 2016.

A frugal vegan who doesn’t eat any meat or dairy. They live in a small well insulated terraced house requiring little heating. It has solar panels and an air source heat pump. They work from home, and don’t go on foreign holidays. They have a computer, tablet, phone, and TV. They buy second hand clothes and furniture, and one new pair of shoes each year. They walk and cycle; and use the bus occasionally. They recycle all their waste. They have a 4-ton footprint.

An eco consumer who has reduced their meat and dairy consumption. They have a small electric car and don’t fly. They heat their home between 14 and 18 degrees in the winter. They only buy new things when their old things brake. They recycle as much as they can. They have a 6-ton footprint.

An average consumer who has a medium sized fuel-efficient diesel car, goes on foreign holidays once a year. They heat their home between 18 and 21 degrees C in winter. They buy new gadgets and clothes when they can afford to. They recycle through the kerbside collection scheme. They have a 12-ton footprint.

An indulgent consumer who eats a meat twice a day. They live in a detached house heated to over 21 degrees in winter. They drive a large powerful petrol car whenever they like. They fly twice a year. They buy new things whenever they feel like it and throw out good stuff. They don’t recycle or turn off lights etc. They have a 27-ton footprint.

A large part of a person’s footprint is made up of the carbon emissions caused by the services they use like the police, education, public transport, the doctors etc. This currently accounts for 2 – 3 tons per person per year but as the UK transitions to Net Zero the services and products that consumers use and buy, are likely to have a much lower footprint with in 10 years.

Building a small home cause about 90 tones of emissions. If these are spread over 100 years this would be 0.9 tones of CO2e per year. If two people live together in the house this would be halved to 0.45 tons each year as part of their personal footprint.

When consumers buy products, they are responsible for all the CO2e and pollution caused in creating the material, manufacturing the parts, assembling the product, transport, usage, and disposal. These emissions are spread out over the life of the product. So, if they buy a TV with a 0.5-ton footprint, they can spread this out over 10 years equal to an annual 0.05 tons per year.

According the WWF footprint calculator methodology we are aiming for the average person to have a 1 ton per year footprint by the time the UK reaches Net Zero in 2050. This means that someone with a 9.5 ton footprint in 2022 is likely to have a 1 ton  footprint on 2050 if they keep up with current trends, such as eating less meat, better insulation, reduced travel, and heating their homes with renewable energy etc. Therefore if you currently have a 10 ton footprint this would be classed as sustainable as long as you are working to reduce your footprint each year. This is based on the assumption that the whole world would be Net Zero by 2050 which is highly unlikely so it’s best to just reduce your footprint as much as you can as we transition to Net Zero.

In the United Kingdom CO2e emissions are reducing each year but the UK is still emitting more CO2e into the atmosphere adding to global warming. The race is on to get to Net Zero, as soon as possible. We should help poorer countries achieve this and encouraging the wealthy countries to achieve Net Zero ASAP. We are all in this together.

​Fill in your personal energy usage, property size, consumption etc. to calculate your own carbon emissions.